Sometimes the sites we see while traveling do not have a positive memory.  Although it can be challenging to enter these places, it is important to go.  Visiting a place like a concentration camp brings knowledge that is crucial to pass down.  Dachau was my first concentration camp.  It may sound odd to say this, but I have been wanting to see a concentration camp for a long time.  This time period in history is intriguing to me, and I always want to know more.  Perhaps I feel that if I can dissect what happened, then I can pass that on to my students to help prevent a tragedy like this from happening again.

Dachau is not an extermination camp like Auschwitz.  It is more of a working/reformation camp.  Dachau began with the goal to reeducate those against the Nazi party.  Journalists, priests, and others were sent to be brainwashed of their own beliefs.  If they did not change, then they did not leave.  Many times they did not leave anyway.  Later, the other groups came.  Jews, homosexuals, and gypsies were a few that could be found in Dachau.  Each was given a symbol to represent who they were.  Most of us know the yellow star, but other symbols were used to show different groups.

A key component of genocide is dehumanizing.  As the prisoners entered they were told they were nothing and had no worth.  The verbal abuse along with the physical changes would tear down the people.  The gates state, “Arbeit Macht Frei” which means work will set you free.  For many, the only freedom that work provided was death, and the ability to leave this world.

If you want to visit a perfectly preserved concentration camp, then this is not the ideal one.  It remained a refugee camp after the war and was then torn down.  They have laid out concrete foundations to show the placement of the barracks. There is one set of barracks that have been recreated to show what it would have looked like.  The beds changed over the duration of the camp.  By the end it was like an endless row of bunk beds.  These beds were made to hold 50 people, but at times they held over 400.  I pictured all of the eighth graders in my school fitting, and it just didn’t seem plausible.  Prisoners would avoid getting up in the night because they would lose there spot and have to lie on someone.

The crematorium is a challenging area to get through.  As you walk in, you see the different sections.  There is a gas chamber located inside, but it was not used for mass killings like other camps.  It was eerie to see the gathering and disrobing room.  As the people would take off their clothes they would enter another room labeled, “Brausebad” which means shower in German.  I wonder how many knew about this deception at the time.  Beyond that you will come across a room used for disinfecting the articles of clothing after the prisoners had removed the items.  In the crematorium you also find the incinerators which seem to still have ashes clinging to the walls.  The final room you come into is where the dead bodies were housed before they were burned.  Our tour guide said that the room was full when the camp was liberated.

The museum really opens the window into what happened at Dachau.  There is a meaningful combination of text and images The medical experiments were horrendous.  Some were given embolisms while others were injected with malaria.  Some even had different air pressures tested on them with tragic results.  There are images from the museum that still flash in my memory as I remember my visit.  One of the most powerful sites at the camp is the memorial.  The sculpture depicts prisoners jumping into a hot fence to escape their suffering.  Some could not endure the pain any longer.

Have you ever visited an infamous place that has left you more informed and wanting to know more? 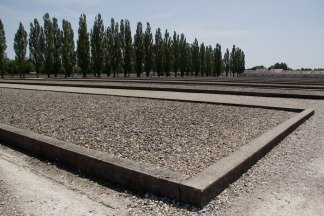 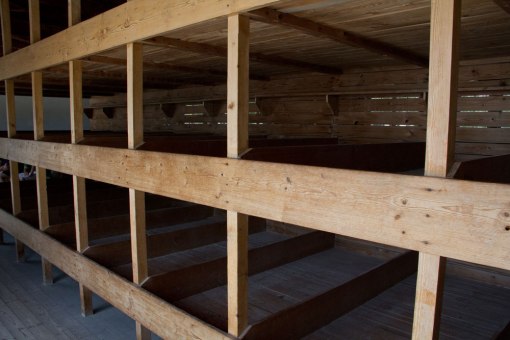 A sign reading bath house misleads people to their death. 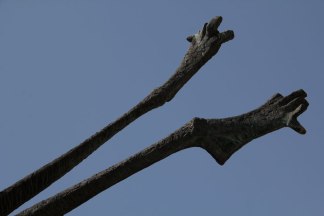 Ashes seem to still remain on the furnaces in the crematorium.

Book lover, traveling gal who strives to connect with people through reading and the quest for knowledge. View all posts by Traveling Librarian